Local councillor puts her hand up to be the ‘Voices Independent’ but then decides to go solo. Dr Sarah Russell discusses the ethics of Cr O’Connor’s tilt for Flinders.

Rather than contest the claims in my tweet, Cr O’Connor chose to hide my tweet on her twitter feed. This is ironic given she claims to be “doing politics differently”.
I later tweeted: (1) Voices had clearly chosen the best candidate (evidenced by Despi’s behaviour to ‘spit the dummy’) (2) Despi did not have the integrity to be the Voices candidate (a line I had plagiarised from another member of Voices).
These tweets prompted another independent Councillor to send me a Direct Message. Rather than engage in a robust debate about the issues I had raised, she described my criticisms of Despi’s actions as “dirty”. Gobsmacking stuff.

Unlike our esteemed Prime Minister, I do not normally share private messages. However, the Councillor has asked me to share her message. 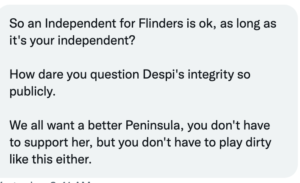 How dare I question Cr O’Connor integrity so publicly? Does she think it is OK to publicly question the integrity of members of the current federal government but not Cr O’Connor? Constituents have every right to question a politician’s integrity, loyalty and trustworthiness.
When a politician’s integrity is questioned publicly, politicians have the right to respond to this criticism. It is simply inadequate to say: “I will stand on my integrity” as Cr O’Connor did earlier this year when her integrity as Mayor was questioned publicly.
It is also worth noting that during last year’s council elections, Cr O’Connor was one of the preferred candidates for the Committee of Mornington Peninsula.  One of the Committee of Mornington Peninsula members is Exxon Mobil. How does this fit with seeking funding from Climate 200?
An article in The Australian stated: “In Victoria, Climate 200 is readying to back former ABC journalist Zoe Daniel in Gold-stein, Despi O’Connor in Flinders and a soon-to-be-unveiled candidate in the Treasurer’s seat of Kooyong.” Given Julia Banks (Despi’s alleged muse) is on the Advisory Council of Climate 200, this did not surprise me. I do, however, question whether Julia may have a conflict of interest. 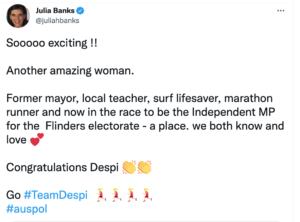 I was later told that the article in the Australian was incorrect though no correction was published. So who knows?
One thing I do know is this: When 3 ambitious Greens’ councillors with pumped up tyres sabotaged Alex Bhathal 2018 Batman (now Cooper) federal election campaign because they were unhappy with the outcome of the preselection process, many locals never trusted these councillors again. Their lack of loyalty also ensured that all the work Alex had done over many years to make Batman a marginal seat was ruined.
I have a sense of déjà vu.