According to the script of the TV series ‘Yes Minister’, there are two basic rules of government: Never look into anything you don’t have to. And never set up an enquiry unless you know in advance what its findings will be.

During the past decade, there have been many inquiries, reviews, consultations, think tanks and a task force into aged care. These inquiries have resulted in a large number of recommendations, most of which have been ignored by successive governments.

The Aged Care Workforce Strategy Taskforce kicked off in December 2017 with a so-called “Summit”. As an attendee, I was given a lanyard with the slogan: “Think. Collaborate. Innovate”. The slogan, the free hug video and the break out sessions left me feeling discombobulated. However, the lunch was delicious.

With a $2 million dollar budget (courtesy of the Australian tax-payer), I expected the taskforce to answer the million-dollar question: Will standards of care be improved by the government mandating staffing ratios in aged care homes?

To settle the disagreement about the value of ratios in aged care homes, the taskforce needed data about actual staffing levels and quality outcomes in Australian aged care homes. They also needed to compare this data with international data. This would have provided evidence to support or refute the following claim: ‘Aged care homes with a higher staff-to-resident ratio have higher standards of care’.

Several researchers, including those at the Australian Association of Gerontology, encouraged the Chair of the taskforce to undertake a systematic literature review on staffing. A rigorous review of the evidence would have been money well spent. Instead, an annotated bibliography that lacked any critical analysis was commissioned.

Rather than rely on evidence, the taskforce regurgitated industry “opinions” about staffing ratios cited in the Productivity Commission and Tune Reports. Not surprisingly, staffing ratios were once again dismissed.

What was surprising, however, is the Report of the Aged Care Workforce Strategy Taskforce dismissed staffing ratios with only one sentence. “Static models or set staffing ratios will not assist in meeting these expectations or necessarily result in better quality of care outcomes.”

Rather than focus on the evidence, the report provides a transformational ‘Belief Statement’: “We exist to inspire people to want to care, enable people to properly care and enhance life through care. Because how we care for our ageing is a reflection of who we are as a nation.”

This belief statement and the Unifying Vision of Care set the tone for this 40,000-word report. It is overflowing with jargon, modern management language and Don Watson’s so-called weasel words. This made the report difficult to read. The unifying vision of care (see Vision below) appears to follow the amusing instructions of “How to write a manifesto”. 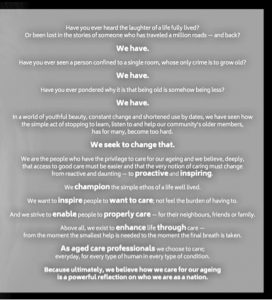 It is not my intention to be disrespectful, but I needed to use google translator to understand the taskforce’s approach to building the workforce strategy: “The taskforce recognised that the strategy must be disruptive in its thinking, transformational in its approach, pragmatic to implement, and supportive of immediate improvements”. Huh?

I also needed google translator to ‘look forward’: “Looking to the future, the aged care industry requires a coherent strategy and key enabling infrastructure to support the strategic investment, translation and uptake of innovations designed to improve workforce capability, care quality and effectiveness”. Goodness me.

One thing, however, was clear: the strategy was “developed with the industry, for the industry”. The bias towards an ‘industry-led’ (i.e. not a ‘consumer-led’) strategy was explicit. The aim was “to develop an industry-led strategy focused on the consumer”. Having no union or genuine consumer representation on the taskforce committee was also an ominous sign.

Not surprisingly, given the report’s abstruse language, the taskforce developed complex processes to address staffing issues. The success of these recommendations depends, in part, on a voluntary code of conduct by industry. These codes only apply to those providers who sign up to them. Good luck with that.

Unfortunately google translator did not help me to understand the findings of The Annual Aged Care Survey. I did, however, understand Korn Ferry, a US corporate giant, was commissioned by the taskforce to undertake this staff survey. I certainly wish someone would offer me $90,750 for doing a tick-a-box survey and then running the responses through a statistical computer program.

According to the report: “Korn Ferry knows more about human performance in the workplace than any other organisation.” Apparently “in order to open up career pathways, there are well-established and research-backed corporate methodologies that can be utilised to enable interaction between job families and opportunities to move across job families”.

Without explaining who or what are “job families”, or indeed the “Job Family Framework” methodology, Korn Ferry produced a colourful report – one for all the family. However, the analysis is poorly explained. Even with my expertise as a researcher, I could not make head or tail of it. Who could?

Like Sir Humphrey Appleby, the taskforce report has a lot of words. But who understands them? And more importantly: who cares?